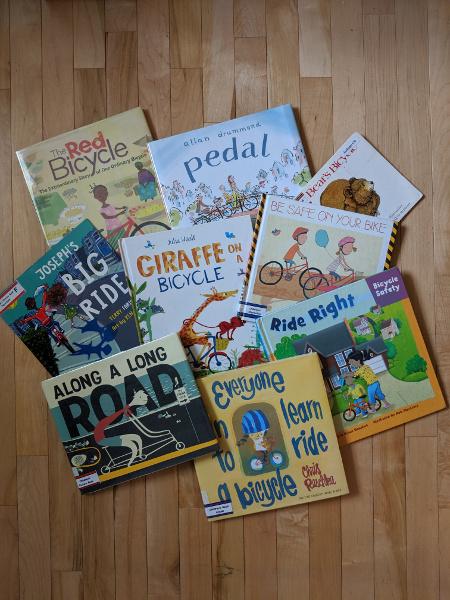 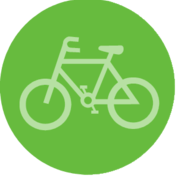 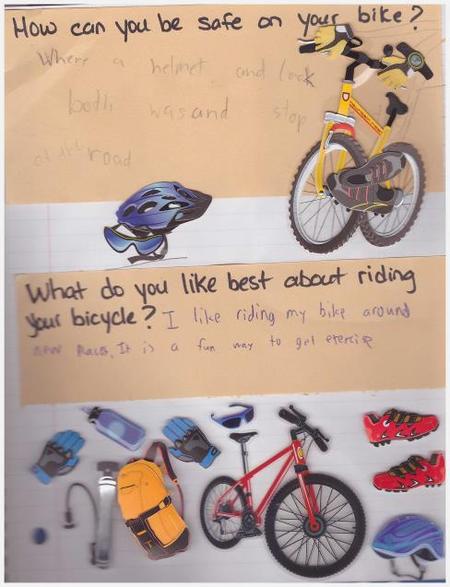 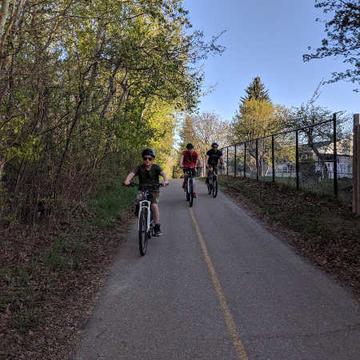 Choose the level of your child:
Toddler/Preschool – discuss the answer(s) out loud first and have your child draw a picture of the answer.

As A Challenge – instead of a question ask your older child to write a story or poem about bicycles or a bike ride adventure.

You could go on a family bike ride to the library!

Try to find some of these Non-fiction learning titles:

Bicycles Pedal Power, by Lynn Peppas, Crabtree Publishing Company, 2011 – A Bobby Kalman Book, this is an easy to read book about the parts of a bike and different types of bicycles .

Bicycle Safety,  by Lisa M. Herrington, Children’s Press, 2013 – A Rookie Read-About Safety Book, this is an easy reader with photographs and not a lot of text but it does give basic safety rules for new little bikers.

Cyclist BikeList: The Book for Every Rider, by Laura Robinson and illustrated by Ramón K. Pérez, Tundra Books, 2010 – This is a great book for older kids as it has more text and detail and includes information like how a bike works, how to choose the right kind of bike, as well as safety and health.

From Steel to Bicycle, by Robin Nelson, Lerner Publications Company, 2015 - And easy reading book to show inquisitive minds how bikes are made.

Made by Hand: Bicycles, by Patricia Lakin, Aladdin, 2017 - with a bit more detail than the above book this one looks at the parts of a bike.

My First Bicycle Book: A Fun Guide to Bicycles and Cycling Activities for Children aged 7 Year +, by Susan Akass, Cico Kids, 2013 – This is a more thorough look at bicycles and includes such ideas as what type of bike to buy, how to adjust the saddle for safety, and a great helmet guide. I highly recommend this one!

Pedal It! How Bicycles Have Changed the World, by Michelle Mulder, Orca Books Publishers, 2013 – This would be a great book for older kids as it highlights the history of bicycles and then shows how bicycles are used around the world.

Safety on your Bicycle, by Lucia Raatma, Bridgestone Books, 1999 – Easy to read for beginner readers, this book offers basic safety pointers for kids.

The Science of a Bicycle, by Ian Graham, Gareth Stevens Publishing, 2009 - For your scientific kids who want to learn about the science of forces. 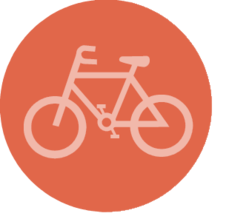 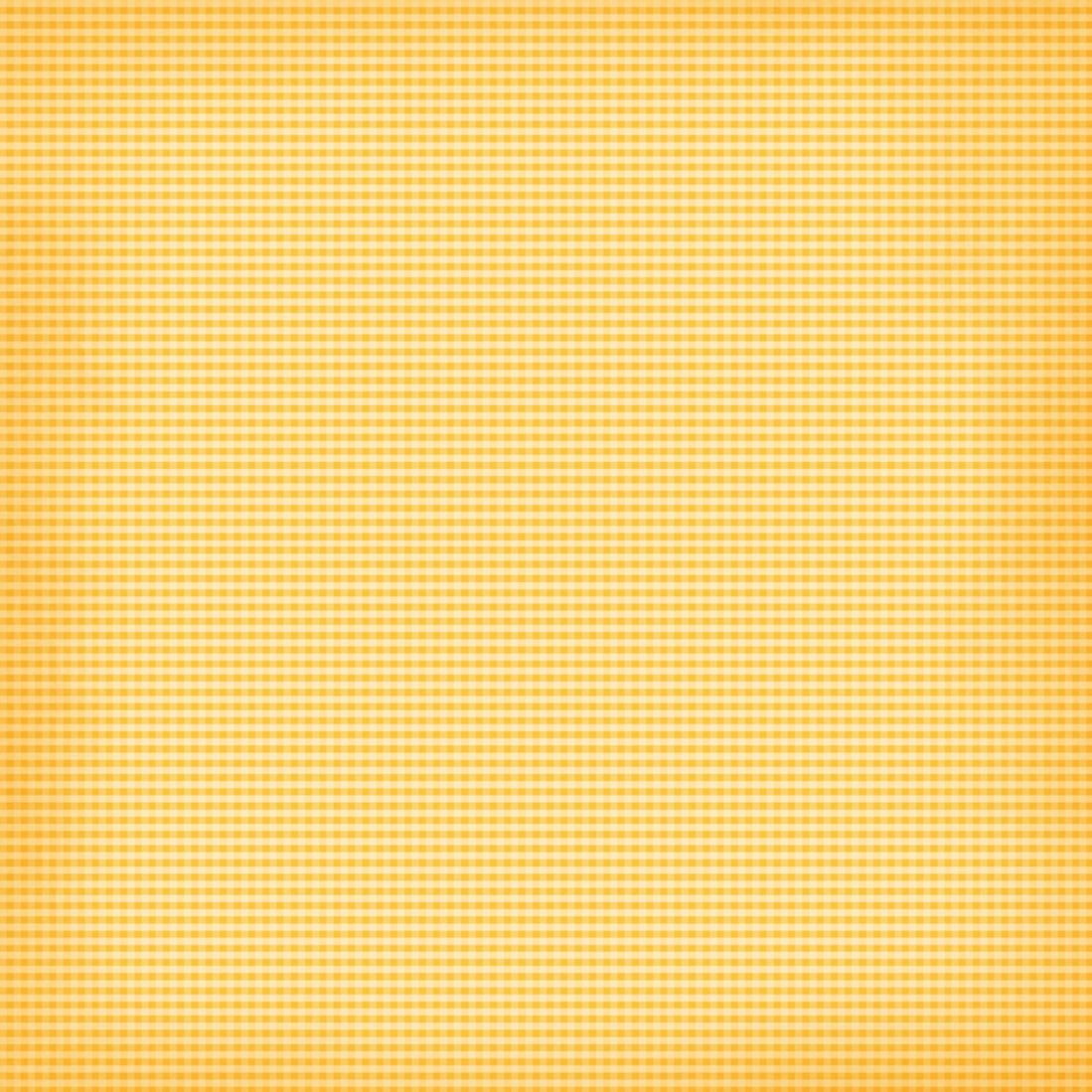 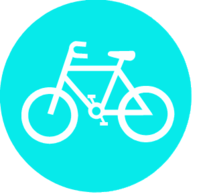 What do you like best about riding your bicycle?  Where would you like to go for a family bike ride this year?  What do you know about bicycle safety? How can you be safe on your bike?

Go to your local library together as a family and find books about bicycles and bike safety! 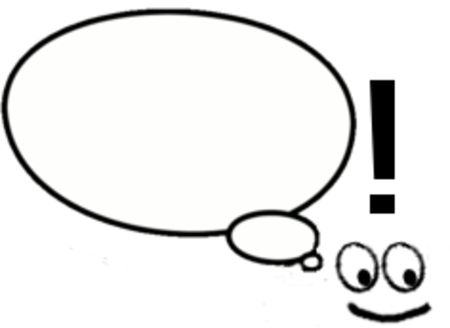 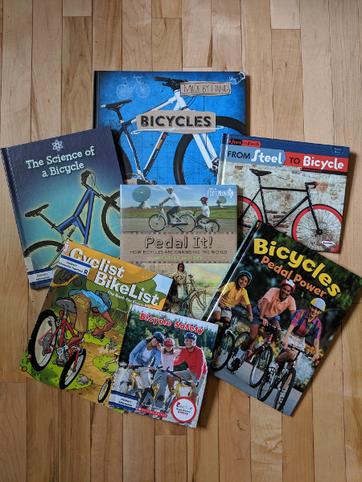 For some picture books about bicycles try these titles:

Along a Long Road, by Frank Viva, Harper Collins Publishers, 2011 – Bold illustrations with very easy to read text shows the fun of riding a bike. What makes the illustrations even neater is that they were created as a single, continuous, thirty-five foot long piece of art using Adobe Illustrator!

The Bear’s Bicycle, by Emilie Warren McLeod and illustrated by David McPhail, Little Brown and Company, 1975, A little boy talks about all the proper ways to ride a bike all the while there are funny illustrations showing a big brown bear not following the rules.

Be Safe on your Bike, by Bridget Heos and illustrated by Silvia Baroncelli, Amicus Illustrated, 2015 - Samantha teaches Jake about Bike Safety when they ride around town.

Everyone Can Learn to Ride a Bicycle, by Chris Raschka, Schwartz & Wade Books, 2013 – IN playful watercolours, this book shows a little girl learning how to ride a bike through perseverance.

Giraffe on a Bicycle, by Julia Woolf, MacMillan Children's Books, 2016 - when Giraffe shows monkey how to ride a bike they test whether "the more the merrier" is a good idea.

Joseph's Big Ride, by terry Farish and art by Ken Daley, Annick Press, 2016 - When Joseph leaves a refugee camp and moves to America he wants to ride a bike. Will the girl he calls Woosh ever let him?

Pedal Power: How One Community Became the Bicycle Capital of the World, by Allan Drummond, Farrar Straus Giroux, 2017 - A true story that shows how Amsterdam and the people of the Netherlands banded together to make bicycles the main form of transportation with thanks to Maartje Rutten.

The Red Bicycle: The Extraordinary Story of One Ordinary Bicycle, by Jude Isabella and illustrated by Simone Shin, Citizen Kid, 2015 - When Leo donates his red bicycle it ends up in Burkina Faso, West Africa, making a difference in many people's lives.

Ride Right: Bicycle Safety, by Jill L. Donahue and illustrated by Bob Masheris, Picture Window Books, 2009 – This easy to read book is a great introduction to basic bike safety. It follows Ajay receiving a new bike for his birthday and then highlights a safety rule.